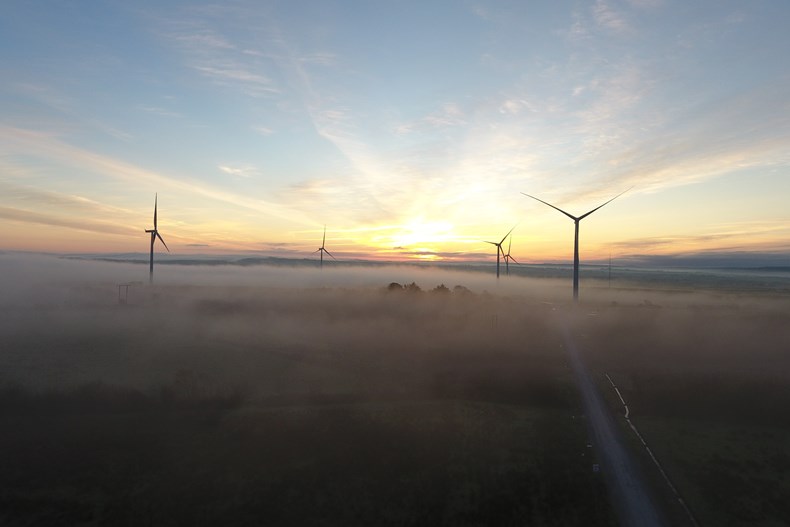 SSE Renewables has been successful in Ireland’s latest competitive auction for onshore wind and solar energy and has provisionally won a contract for low-carbon power for the proposed 104.4MW Yellow River onshore wind farm project in Rhode, Co. Offaly. The 29-turbine wind farm will contribute to Ireland's 2030 renewable energy targets.

Yellow River is one of 80 onshore wind and solar projects in Ireland to have secured provisional contracts for a maximum of 16.5 years of new renewable energy generation under the Renewable Electricity Support Scheme (RESS-2). At 104.4MW it is also one of the largest projects to secure a provisional contract.

A total Deemed Energy Quantity of 2,747.89GWh was provisionally successful, equating to around 414MW of onshore wind and 1,534.1MW of solar. Due to its 100MW+ scale and the lower cost of delivery associated with onshore wind technology, Yellow River Wind Farm is one of the more competitive projects to have been successful in the RESS-2 process. The provisional results are subject to Irish Government approval with confirmation due on 15 June 2022.

The Yellow River Wind Farm project was granted full planning consent in 2014. SSE Renewables will continue to progress the 29-turbine wind farm in Ireland’s Midlands through development and towards a Final Investment Decision. The project is expected to support up to 80 full-time construction jobs at peak delivery. Subject to a timely positive Final Investment Decision, SSE Renewables expects to complete delivery of Yellow River Wind Farm in 2024 and will operate the asset throughout its lifetime.

When complete Yellow River will have an installed capacity of 104.4MW. This means it will be capable of generating enough low-carbon renewable energy to power the equivalent of 66,000 homes annually and offset 71 million Kg of carbon per annum, contributing significantly to Ireland's 2030 renewable energy targets.

The provisional contract win means Yellow River will receive guaranteed revenue for the low-carbon electricity it generates for the duration of the RESS-2 contract. The wind farm will also support a substantial Community Benefit Fund to the value of around €9 million over the lifetime of the RESS-2 contract. The Fund, which will be designed in consultation with the local community, will help promote a range of energy sustainability, climate action and other community initiatives in the area around the Co. Offaly wind farm.

"We’re delighted the Yellow River wind farm project has been provisionally successful in this auction round and has secured a route to market which will enable the onshore project to contribute to Ireland's 2030 renewable energy targets."

"We will continue to progress the project, with a target of completing the wind farm in 2024. Once operational, we look forward to working with the community to share the benefits of Yellow River wind farm through its substantial Community Fund.

“Delivery of this latest wind farm development in Ireland further boosts the delivery of SSE’s Net Zero Acceleration Programme which will see the company invest £12.5bn over the next five years, or £7m a day, to address climate change head on. It will also contribute to our plans at SSE Renewables to double our installed renewable energy capacity to 8GW by 2026 and increase our renewables output fivefold to over 50TWh annually by 2031.”

The volumes procured under the RESS-2 auction process will make a significant contribution to the achievement of Ireland’s increased ambition of 80% renewable electricity by 2030, as set out under the National Development Plan and the policies and measures in the Climate Action Plan 2021. The RESS Scheme crucial to ensuring Ireland remains on its pathway to contributing towards an EU-wide renewable energy target of 32% by 2030 and to the 7% per annum reduction in overall greenhouse gas emissions from 2021 to 2030. RESS auctions will be held at frequent intervals throughout the lifetime of the scheme.