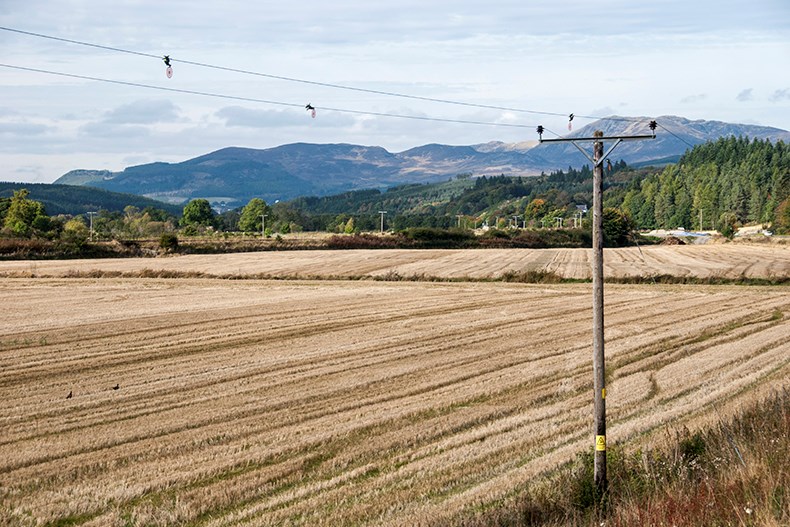 As a large energy company, the scale and breadth of SSE’s activities mean that we naturally interact with the environment in many ways, presenting challenges that need to be managed. Our most material environmental impact is the carbon emitted when generating electricity. To address this we are taking steps to significantly reduce our impact on climate change and our business model is focused around supporting the transition to low-carbon electricity systems in the UK and Ireland. We have an ambitious £12.5bn capital investment plan to accelerate progress towards net zero over the five years up to 2026, the majority of which will go to low-carbon infrastructure.

SSE announced its long-term goal of achieving net zero greenhouse gas (GHG) emissions across its scope 1 and scope 2 emissions by 2040 (subject to security of supply requirements) and for remaining scope 3 emissions by 2050. These net zero ambitions are supported by our interim science-based targets aligned to a 1.5oC pathway. SSE’s Net Zero Transition Plan clearly sets out for our stakeholders the key actions we will take to drive progress towards these targets.

You can read SSE’s Net Zero Transition Plan here and scroll down to see more information on our interim commitments on carbon reduction. 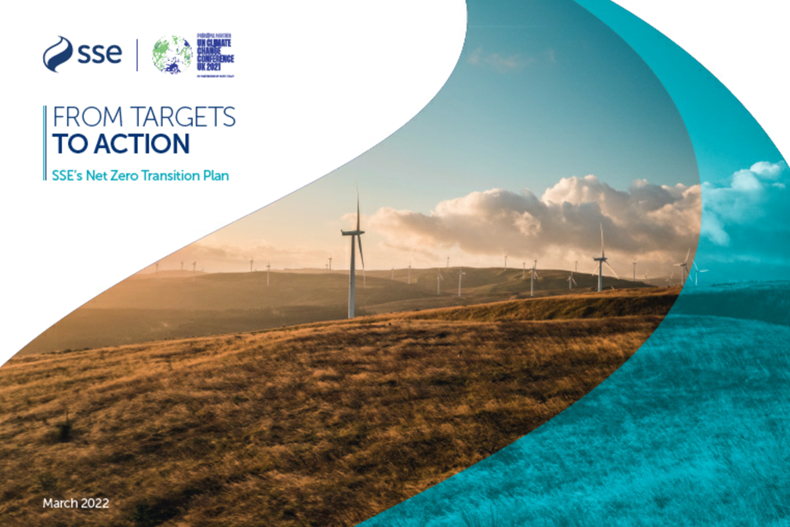 We also understand that investors are increasingly looking for robust mechanisms through which they can ensure their investments are sustainable and take account of climate-related risks. As a result, SSE has deliberately pursued a strategy of issuing green bonds to finance its investment plans. See the Green Bonds page for more information.​

In April 2020, SSE set medium-term carbon targets, approved by the Science Based Targets Initiative (SBTi), aligned to a ‘well below two-degree’ pathway - which was the most stretching pathway for the power sector available from SBTi at the time. Since then, the SBTi has published a new pathway for the power sector, allowing electric utilities to set science-based targets in line with limiting warming to 1.5°C. This pathway requires the power sector to decarbonise at a much faster rate than others, due to the rapid technology cost reductions and the important role that the power sector will play in helping other sectors reduce emissions as they move from fossil fuels to electrification.

Using the SBTi's new power sector 1.5°C - aligned science-based target criteria, SSE submitted updated targets to the SBTi for approval in September 2021. The SBTi approved these more stretching targets in November 2021 and SSE's renewed science-based carbon targets for scopes 1 and 2 on the 1.5°C pathway are to:

These targets are supplemented by SSE’s existing interim Scope 3 targets, also verified by the SBTi, which are to:

These targets are aligned with government and stakeholder demands to achieve net zero emissions and are fundamental to SSE’s capital investment and allocation plans outlined in its Net Zero Acceleration Programme. 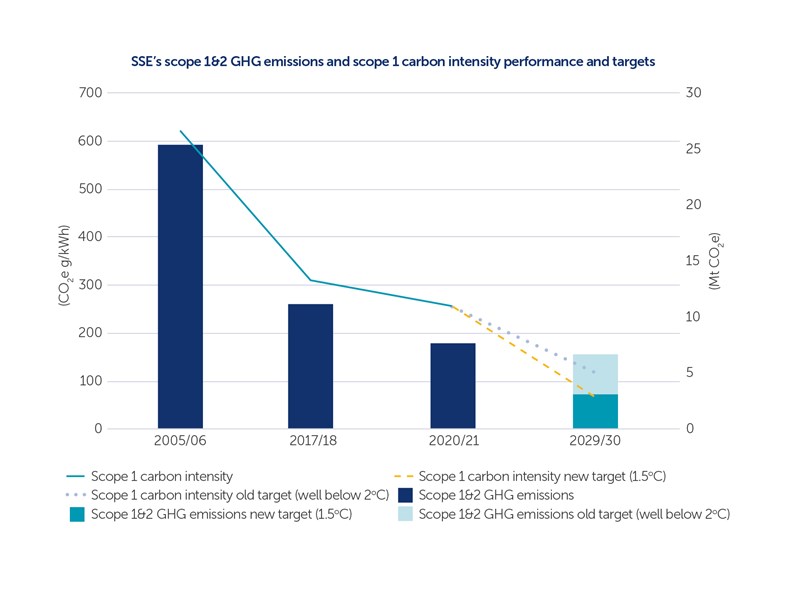 In October 2021, SSEN Distribution became the first UK Distribution Network Operator to set science-based targets in line with a 1.5°C pathway, verified by the SBTi. These targets play an important role in supporting the SSE Group’s net zero ambitions, alongside the 1.5°C-aligned, SBTi-approved carbon targets set by SSEN Transmission in August 2020. SSEN Transmission was the first electricity networks company in the world to receive external accreditation for a science-based target in line with a 1.5°C global warming pathway.

We are committed to open and meaningful climate-related disclosures to allow stakeholders to fully assess our performance in managing climate-related issues. Information provided in SSE’s Annual Report and Sustainability Report, represent our disclosures in line with the Task Force on Climate-related Financial Disclosures (TCFD) recommendations, which include a quantification of the potential financial impacts of SSE’s key climate-related risks and opportunities.

We have also assessed the resilience of SSE’s business model to different climate-related scenarios in our Transition to net zero and Post Paris reports. 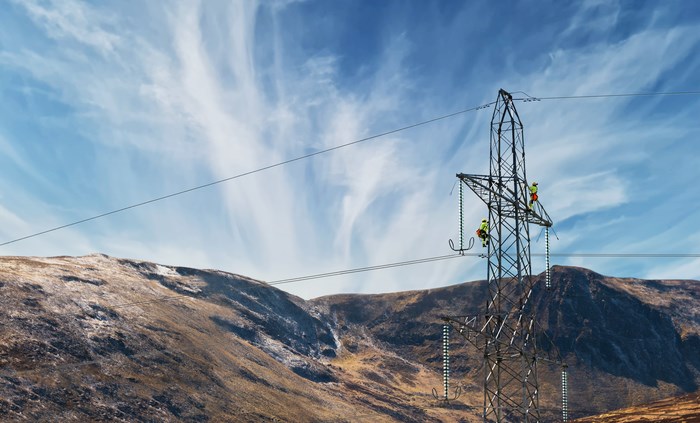 We operate in some of the UK and Ireland’s most remote areas which are home to a wide variety of valuable ecosystems and habitats. We have robust environmental governance and policies in place, and work constructively with a wide range of stakeholders to produce sustainable environmental outcomes.​

SSEN has recently taken steps to protect swans after being alerted to the potential danger of them striking the overhead cables near Caversham Lakes, near Reading.

To address this, SSEN worked with The Swan Sanctuary who advised its engineers on the best locations for bird divertors to be installed on overhead cables near to the flight path of the swans living at the lakes; a programme of works that was completed at the start of the year ahead of the critical time for birds nesting and breeding in the area.

The divertors are designed and placed so that they alert the birds with alarms, resulting in them avoiding flying near the live lines without driving them away from their original route.

SSE Thermal worked in conjunction with the Trent Rivers Trust to identify an eels habitat enhancement opportunity near to its Keadby power station in Nottinghamshire. The project aims to expand and improve on existing eel refuge habitat for juveniles in the Trent catchment and covers 6ha of wetland which is connected to the Trent by a narrow channel.

As part of the project, the existing channel on the site was regraded by extending and deepening the existing wetland areas, which involved removing 1,800m3 from site. The area was deepened with a series of shelves to provide water of varying depths to increase suitability for marginal plants to colonise, and to provide the perfect refuge habitat for eels.

The new channel will help young eels reach the wetland in spring during high tides and the wetland will now hold water throughout the summer until the eels are large enough to return to the river.

The work will also benefit many other species especially aquatic insects, small fish, amphibians, birds and mammals. A similar project will be delivered in 2021 in the Mersey catchment at SSE’s Fiddler’s Ferry power station.

For some planned renewable energy projects, as initially proposed, there can be potential impacts on biodiversity. In these cases, SSE Renewables strives to offset the potential impacts by developing Habitat Management Plans (HMPs), or fund conservation activity conducted by other groups.

As far as is practical, SSE Renewables’ plans shall be long-term commitments to manage and monitor identified target species and habitats in order to ensure a positive environmental impact.

These projects may also deliver net biodiversity enhancement and through projects such as restoring degraded peatland or native broadleaf woodlands.

SSEN Transmission has developed a site optioneering toolkit as part of its biodiversity net gain approach, which allows a rapid assessment of the baseline biodiversity of different site or route options.

SSEN assessed its first overhead lines during 2020 at both the routing stage and the alignment stage. At the route stage this has allowed projects to identify areas of potentially irreplaceable habitat and will reduce the potential impacts of our developments.

The toolkit allows consideration of biodiversity at the earliest stages of development and was recognised by a number of external stakeholders in 2020:

The consequence of human activity on the natural environment through consumption and the resulting habitat loss and species decline is as great a risk to people as climate change. In the transition to net zero, we are seeking to actively to manage our environmental footprint in a way that minimises adverse environmental impacts and, where possible, seeks to add environmental value too.​ 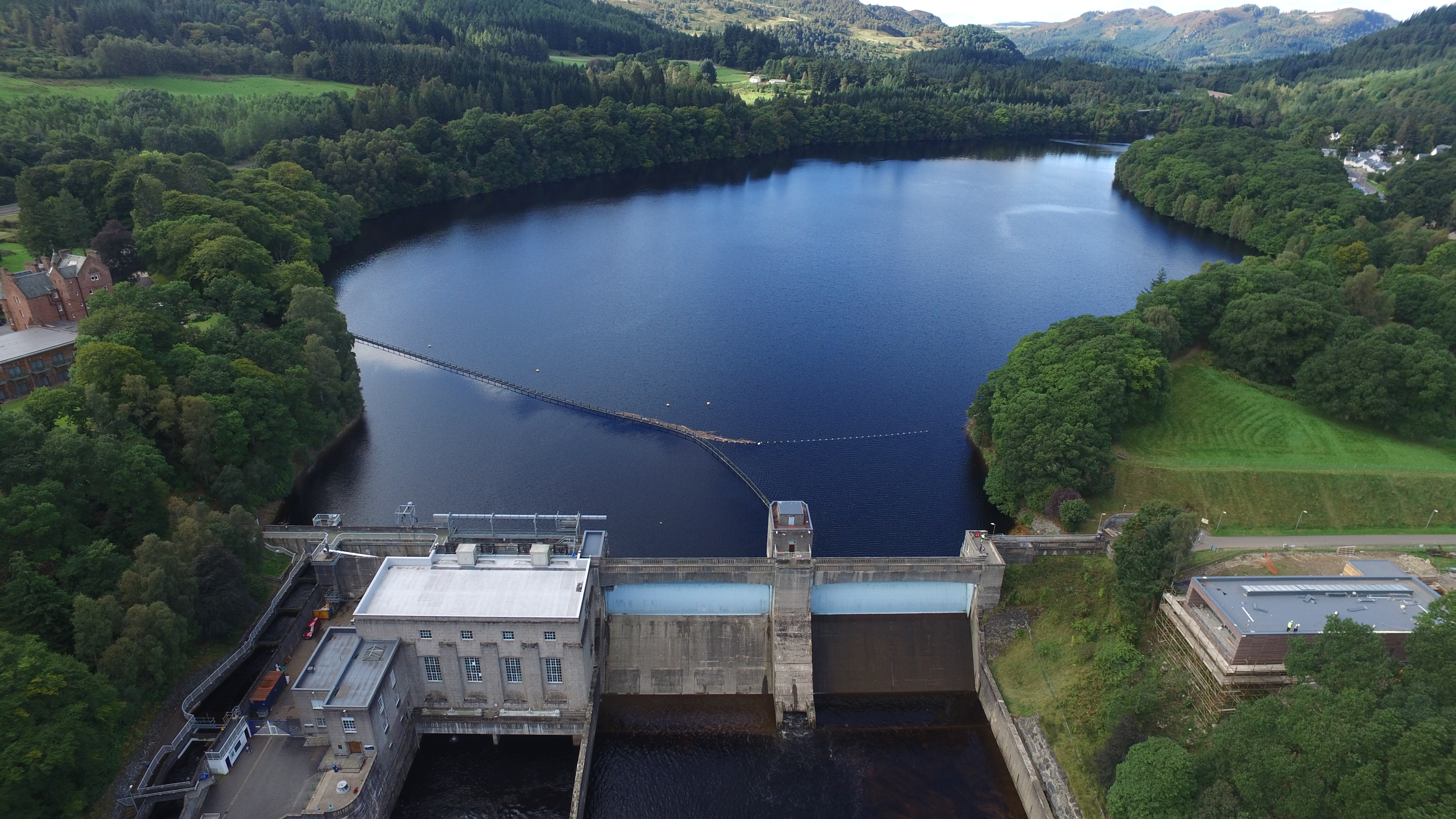 SSE depends on water in various ways across our operations, from use in electricity generation to an amenity in our buildings, and we seek to use water in a sustainable way. None of SSE’s thermal and hydroelectric generation assets impact on water stressed areas, as defined by the relevant environmental regulators.

Water abstracted can vary each year due to increases or reductions in water passing through SSE’s hydro-electric generation plant as a result of lower or higher levels of rainfall.

The vast majority of water abstracted is used in SSE’s hydro-electric generation operations. This water passes through turbines to generate electricity and is returned to the environment almost immediately. Total water abstracted is often used by our stakeholders to judge our environmental impact and allow a comparison across businesses and sectors. We believe that this indicator taken in isolation can reflect negatively on hydroelectricity generators. To help stakeholders better understand a more proportionate environmental impact, SSE’s abstraction volume excluding hydro-electric generation has also been provided in the latest sustainability report.

SSE’s thermal generation sites have seen a reduction nitrogen oxides (NOx) and sulphur dioxide (SO2) emitted as a result of the closure of SSE’s last remaining coal-fired generation plant in March 2020.

In 2020/21, SSE’s electricity networks businesses reviewed the methodology used to report SF6 data (and this has been restated in the 2020/21 Sustainability Report). SF6 is widely used by the electricity industry around the world due to its insulating properties and therefore its ability to keep people safe from electrical ‘arcing’. You can read more about what SSE is doing to increase the use of alternative technologies in our Sustainability Report 2021.

SSE acts to reduce energy use and thereby cut carbon from its assets through a combination of physical improvements and building user engagement.

We have invested in a range of energy efficiency measures and in particular delivered a programme of LED lighting upgrades to depot sites. In 2020/21, SSE purchased 100% of electricity for use in its facility managed offices from renewable sources, backed by renewable guarantees.

Our ‘Better Off’ behaviour change campaign, alongside our investment of £12.8m since 2011/12 in energy efficiency and building renewable generation programmes, has helped to reduce carbon emissions from energy used in our buildings.

This investment programme has assisted in the delivery of a 42% reduction in carbon emissions since 2017/18. SSE is a member of the Climate Group’s EP100 initiative to encourage businesses to improve energy productivity and has pledged to cut carbon from its offices and depots by 20% by 2030 from a 2018 baseline.

SSE is also a member of the EV100 pledge to move to an electric vehicle fleet by 2030.

SSE have waste management controls within each of our businesses and follows the waste hierarchy to reduce, reuse and recycle its waste. We have an internal Waste Management Standard that guides our businesses in their day-to-day activities.

SSE provides recycling facilities at key offices and operational sites and adheres to the relevant regulatory requirements for waste management at different sites and locations.

In recent years, we have been implementing a waste improvement programme to improve the management and reporting of waste performance. In accordance with its Group Environment Strategy, we seek to substantially reduce waste by delivering a waste minimisation strategy, setting targets in 2021 onwards.

To support the waste management strategy, SSE Renewables is investigating the options for diverting end of life fibreglass from landfill. In addition, SSEN Transmission is developing specific waste and resource use requirements across waste streams from operations and construction projects, and as a regulated business has set targets of zero waste to landfill and 70% or greater recycling, reuse, recovery rate by 2026.